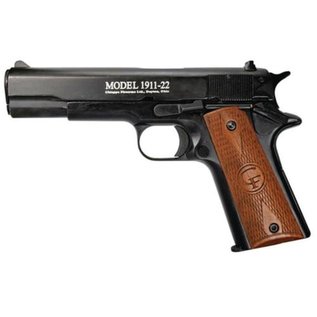 The Chiappa Model 911 is a rimfire replica of the most well-known firearm designed by John Browning. The original M1911 was a single-action, semiautomatic pistol chambered for the .45 ACP cartridge. It was the standard-issue side arm for the United States armed forces from 1911 to 1985, and is still carried by some U.S. forces. In total, the United States procured around 2.7 million M1911s and M1911A1 pistols during its service life. The Chiappa Model 1911-22 features the same weight, and handling characteristics of the original 1911, however, we have redesigned the action utilizing a fixed barrel design yielding very high accuracy at an affordable price. (Less money than most 1911 rimfire conversion kits). The Chiappa 1911 is constructed from Chiappalloy* & steel components featuring wooden two piece grips. It is the natural choice for semi-auto plinking, target shooting, and affordable handgun fun.